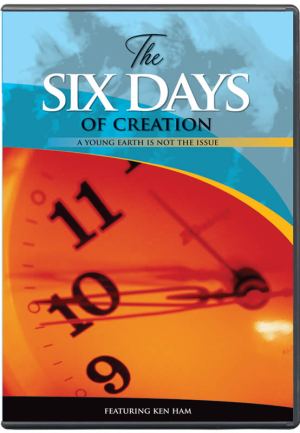 The debate over whether God really created in just six days might seem to about the age of the earth: is it thousands or millions and even billions of years old? But, as presenter Ken Ham shows, the real issue is one of biblical authority.

“You don’t get millions of years out of the Bible do you?” Ham asks. “I go to churches and sometimes they say: ‘We believe in the local flood.’ ‘We believe in theistic evolution.’ ‘We believe the day age theory.’ ‘We’re progressive creationists…who believe God created over millions of years and the Big Bang and so on.’ ‘We believe the gap theory.’ And then they say, ‘What do you believe?’ And I say, ‘What the Bible says.’ Because not one of those positions comes from the Bible. They are all imposed upon the Bible. And by the way, when you impose man’s ideas on the Bible, you know what you are teaching to generations in our culture? That you don’t have to take God’s Word as written; you can believe man’s word is infallible and reinterpret the Word of God. You are undermining biblical authority.”

That’s the real issue underlying the battle over Genesis. Later Ham notes he doesn’t even like to be called a “young earth creationist” because that makes it seems as if the earth’s age is the key issue instead. But the reason we need to have a proper understanding of the age of the Earth is only so that we can have the proper respect for biblical authority – if the Bible doesn’t mean what it says in the first chapter, then how can we trust it anywhere else?

Some of the points Ham addresses include:

This is a very good lecture, as lectures go, so if you are interested in the material you’ll enjoy the presentation – it is a very good and thorough introduction to the topic. This has been circulating among several friends, and we’ve all appreciated it. However this is not something that will grab attention – it is simply a man at a podium with some powerpoint slides. So, a good one for adults who want to know more, but not really something for kids, or those only marginally interested.

You can buy it on DVD at  Answers in Genesis or you can watch it for free online, in 4 parts at: https://answersingenesis.org/media/video/age-of-the-earth/six-days-of-creation-a-young-earth-not-the-issue/

This review was first published on www.reelconservative.com.