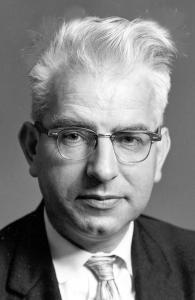 Dr. Louis Praamsma was the pastor of the Fruitland Christian Reformed Church, near Hamilton, Ontario.  By 1979, he was officially retired.  However, he continued to write and especially to contribute to the fight for orthodoxy in the CRC.  In the late 1970s, men such as Allen Verhey and Harry Boer were undermining biblical inerrancy and the CRC tolerated it.  It was in this context that Louis Praamsma wrote a pair of articles for The Outlook.  There he interacted with Harry Boer’s rejection of the doctrine of reprobation.  That happened in the second article published in the January 1980 issue of The Outlook.  In his first article (December 1979), he took on Boer’s attack on Scripture and specifically his accusation that the doctrine of biblical inerrancy is rationalistic.  Though our contemporary context is not exactly the same, there are some parallels and for that reason I think it’s worthwhile to revisit what Dr. Praamsma wrote on this.  This is especially because there is often correlation between an undermining or denying of biblical inerrancy and compromising on creation.  This four-part series was originally published on Yinkahdinay.  Here’s part 1:

Calvinism has often been accused of rationalistic tendencies, of attaching too high a value to reason and indulging too much in reasoning.  Such charges started already with Luther who accused Zwingli of rationalizing about the mystery of the Lord’s Supper, and they continued with persons who called themselves genuine Lutherans (Gnesio-Lutherans) who mercilessly attacked Calvin on the same ground, although Calvin had taken issue with Zwingli and clearly taught the mystical union with Christ at His table.  Calvin and the Calvinists have also been accused of reasoning too much in the area of predestination; the Arminians of the first hour and their most recent successors have never stopped saying that Calvin built a colossal system, starting with an eternal decree of God, and ending with consigning some of the creatures made in His image to heaven, but most of them to hell.  That system, it is said, was not founded on Scripture but a product of the logical arguments of the scholar of Geneva.

Finally, Calvin and the Calvinists have been accused of rationalistic tendencies in the area of revelation; liberal, modern, and neo-orthodox theologians have asserted time and again that Calvinists are the people of a book-religion; that they have included the living Word of God in a book with propositional truths; that they have applied all their logical acumen in order to harmonize the disconnected and discordant words of that book.  One of the last ones (to my knowledge) to make this kind of accusation has been Dr. Harry Boer, when he wrote, “We have learned that reprobation exegesis in the Reformed tradition is an unprincipled, ruthless exercise that bends any desired Scripture in its foreordained meaning” (Acts of Synod of the CRC, 1977, 678).

It is at this point that I would ask the question: rationalism – on which side?  Bending of Scripture – on which side?  And I would like to point out two things that are presently under discussion among us and are referred to as ‘problems’ nowadays, firstly that of the authority of Holy Scripture and secondly that of predestination (election and reprobation).

As far as the first point of doctrine is concerned, I would stress the fact that Calvinism in general and the Christian Reformed churches in particular, thus far have been marked by their faithfulness to Scripture.  Without any hesitation the Bible was called an ‘infallible rule’ (BC article 7), and faith was considered ‘a sure knowledge,’ whereby I hold for truth all that God has revealed to us in His Word (HC QA 21).  Even more significantly, our churches owe their identity to, have been fathered and mothered by courageous men and women who seceded from larger and heterogeneous churches, because the latter were infested by eighteenth- and nineteenth-century criticism of Scripture.

One thing was certain beyond any doubt: we stood upon the solid rock of Scripture and that Scripture could not be broken.