This article, by Rev. Williamson, is reblogged with permission from The Aquila Report.

Hebrews 11:1 gives us an inspired definition of true (saving) faith. “Faith is the assurance of things hoped for, the conviction of things not seen.” According to this definition true faith (faith as God has defined it) is concerned with two categories of things: 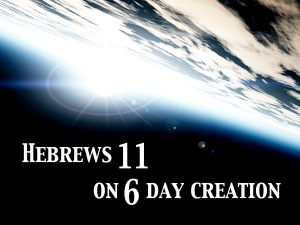 Furthermore, according to this definition, faith is the source of assurance and conviction concerning both of these categories of things.

What, then, are some of the “things hoped for” in our Christian faith? To name a few:

Since God alone knows the future it is obvious that three these things (and any other future things) can be known by us in only one way. That way is by God telling us in words what is going to happen in the future. The most brilliant scientist cannot know anything at all about any of these three things in any other way than the way you and I can know them. Therefore he cannot speak with any more authority on these things than you or I can as Bible believing people

Parallel to “the things hoped for” which can only be known by faith, are “things not seen.” One such thing of great importance is the creation of the universe. Creation was not “seen” by human eyes. Adam was created last, on the sixth day, so even he wasn’t an eye-witness of these acts of creating. Therefore Adam himself — and all the rest of the human race — could only have reliable knowledge about God’s work of creation if he revealed such information to them in words.

He has revealed them to us in Genesis 1-2.

The most brilliant scientist has no access to information about creation beyond what God has said in the Bible. That is why Hebrews 11:3 says “by faith we understand that the universe was created by the word of God, so that what is seen was not made out of things that are visible.”

In other words, in both instances — with respect to future things and past things unseen by human observers — there is only one source of knowledge or understanding. That source is what God says in words in the Bible.

The most brilliant scientist is therefore brought down to the same humble level as any other person when it comes to assured knowledge of creation.

Since the truth about creation is found in the Bible alone, two things that are often said to stand in the way of believing in six-day creation must be firmly rejected. One is the claim that scientific evidence in the world itself proves that it is old (meaning that it took a long time to make it). The other claim is that one can hold on to biblical faith and yet allow for evolution.

1) We must reject claims that the world is old

When something is created instantly it has the appearance of age. This clearly seen in two of the miracles of Jesus: creating wine at the wedding feast at Cana, and creating food to feed the 5,000.

If it were possible to go in one of our imaginary ‘time machines’ to visit that wedding feast in Cana, and if a sample of that newly made wine could be taken and whisked back to the famous FBI forensic lab in Washington D.C., those world-renowned scientists would surely say that ‘it took at least 100 years to make wine of this quality.’

2) We must reject that evolution and the Bible are compatible

Evolution teaches us to believe that the things we see in the world today have evolved out of other things. It teaches that one thing can evolve out of another thing. But God says “that which is seen was not made out of things that are visible.”

When Paul stood on Mars Hill in Athens he knew he was facing a people who had once known the true God, but he also knew they did not like the God they originally knew. So they became foolish: turning away from God to worship and serve the creature instead of the creator (Rom. 1:25).

The Greeks had once honored a supreme God whom they called Zeus. But, as Aristophanes put it, “vortex drove out Zeus and came to reign in his place.” Vortex was a Greek name for ever-swirling change. I also read somewhere of a later Greek Philosopher who already said—2,000 years ago—that “the worm, striving to become man, mounts up through all the spires of form” (the equivalent of the modern idea of evolution). How true the wise words of Solomon who said “there is nothing new under the sun!” (Eccles. 1:9) What we face today, in our American culture, is the very same God-denying apostasy, in principle, that Paul faced on Mars Hill.

What we need today in Presbyterian and Reformed Churches is a new surge of faith as God himself has defined it—faith created in us by the word of the wonder-working God of creation as well as redemption.

Is this not the message of Psalm 33?

Let all the earth Jehovah fear
Let all that dwell both far and near
In awe before him stand.

For, lo, he spoke and it was done
And all, with sovereign power begun,
Stood fast at his command.

G. I. Williamson is a retired minister in the Orthodox Presbyterian Church, living in the Orange City, Iowa area. He is the author of study guides on the Westminster Confession of Faith, the Westminster Shorter Catechism, and the Heidelberg Catechism.