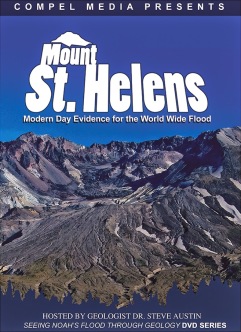 Thirty-four years ago Washington State’s Mount St. Helens blew its top. The eruption on the morning of May 18, 1980, knocked 1,300 feet off the top of the mountain, sending a massive landslide down its slope, clearing out a forest of trees, and washing out the lake at its base. For nine straight hours it put out the energy equivalent of about one Hiroshima-type atomic bomb every second.

The sheer power of this eruption makes it interesting, but this event is of particular interest to creation scientists like Dr. Steve Austin. The eruption scoured the area clean, but also lay down layers and layers of rock strata from the volcanic ash. The eruption also caused the creation of deep, new, instantaneous canyons, that – if we didn’t know better – looked to be many thousands of years old.

In other words, the Mount St. Helens eruptions showed that catastrophic events can rapidly create huge geological features. Dr. Austin shows how this has implications for the Flood, showing how it too could have rapidly laid down many layers of rock strata, and carved out even huge features, like the Grand Canyon. Just because its massive does not mean it took long to form!

I gave this a 7/10 rating, because it is well done, but I do want to note that if you aren’t already interested in this subject matter, this isn’t the sort of documentary that will just grab you. There is clearly a professional behind the camera, but overall the visuals are pretty tame (no computer graphics and no visualization of the actual eruption). So this is one you get for the fascinating information.

The DVD can be ordered at AnswersInGenesis.org and Creation.com or at FloodGeologySeries.com.