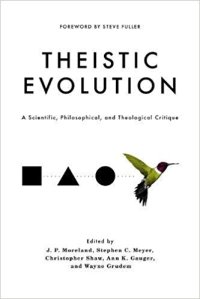 Back in late 2009, some ministerial colleagues and I were discussing with concern the apparently growing influence of evolutionary thinking in the Canadian Reformed Churches.  What could we do about it?  Five of us decided to collaborate on an article, “Ten Reasons Why Evolution is Dangerous and Evil.”  Authored by Walter Geurts, George van Popta, John van Popta, Jim Witteveen and yours truly, this was published in the January 1, 2010 issue of Clarion.  You can find it online here.

At the beginning of March 2010, an 11-part series of responses began to be published on the Reformed Academic blog.  It’s not my intent to interact with those responses as such.  Rather, I want to point out one particular point of response.  It relates to something I’ve read more recently.

One of the “ten reasons” was that “Evolution must regard Genesis 2:8 as mythical.”  Rev. John van Popta argued that the creation of Adam was a special act of God.  Adam was created from literal dust as the first human being.  Genesis 2:8 gives us history, not myth or allegory.

In their response, Reformed Academic (RA) insisted they agree:  “We fully affirm the main point of this paragraph, namely that man is a special creation.”  They pointed that there are those who “lend credence” to the theory of common ancestry who also affirm “the clear Biblical teaching of the soul, and that the human person is made uniquely and specially in the image of God.”  RA maintained that they do not join with those who regard Adam as a-historical.  At first glace, all of this may seem quite palatable and encouraging.

What was sometimes not recognized in the early stages of this debate was that some words were being used equivocally.  What we meant by “Adam as the first human being created specially by God from the dust in history,” did not necessarily mean the same thing as what they meant by that.  People can say that and yet lend credence to the theory of common ancestry.  One way is by positing the existence of pre-Adamite hominids.  These are human-like creatures supposed to have existed before and with Adam.  There could have been hundreds of generations of these hominids which had evolved over millions of years.  But no human beings!  No, Adam is still the first human being.  God selects a pair of hominids, pulls them out of their lowly origins (“dust”), and bestows on them his image.  At that point, they become human beings with souls.  It’s important to realize:  in this view, this really happens at some point in history.  So everything is preserved intact:  the possibility of biological macro-evolution (common ancestry), Adam as the first human being specially created by God in his image, and Genesis as an actual historical record.

In the thick tome Theistic Evolution: A Scientific, Philosophical and Theological Critique, Wayne Grudem has a 54-page essay entitled, “Theistic Evolution Undermines Twelve Creation Events and Several Crucial Christian Doctrines.”  Grudem makes many valid points.  However, I can imagine some theistic evolutionists reading it and offering a similar critique to what RA offered on some of our ten reasons.  Let me mention a few examples.

Grudem states that, according to theistic evolution, “Adam and Eve were not the first human beings (and perhaps they never even existed).”  But a theistic evolutionist could put his hand up and say, “Wait a moment, Dr. Grudem.  With you, I do believe that Adam and Eve were the first human beings.  There were no human beings before this historical couple.  Your critique doesn’t apply to me, even though it’s true that I lend credence to the theory of common ancestry.”