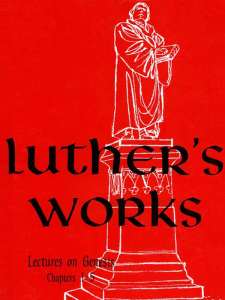 I recently acquired a copy of  Luther’s Works, Volume 1: Lectures on Genesis 1-5. It’s always enjoyable to read Luther, and his typically “earthy” style is in evidence in this volume, even though these are transcriptions of Luther’s original lectures, with the occasional addition made by a later writer. As the editor of this volume says, “The hands are sometimes the hands of the editors, but the voice is nevertheless the voice of Luther.”

These lectures were originally delivered nearly five hundred years ago. But despite their age, and despite the fact that Luther seeks to correct errors that were then common, but which have now been replaced by others, there is much here that is very applicable to current discussions on the Biblical account of creation. “Everything old is new again,” as the song says. Or even better, “There is nothing new under the sun,” as Solomon said in Ecclesiastes.

The first aspect of Luther’s lectures that is worth noting is Luther’s humility before God’s Word. Luther often wrote and spoke brashly, but like John Calvin, he knew when to be silent, and he knew that the believer’s proper posture before God’s Word is one of absolute humility. And so, speaking of the eternity of God, he writes:

“He is within, without, and above all creatures; that is, He is still incomprehensible. Nothing else can be said, because our mind cannot grasp what lies outside of time.”

Writing of the creation of light on the first day, Luther reveals the same sort of humble acceptance of what God’s Word says:

“Although it is difficult to say what sort of light it was, nevertheless I do not agree that we should without reason depart from the rules of language or that we should by force read meanings into words. Moses says plainly that there was light, and he counts this day as the first of the creation. Therefore I am of the opinion that this was true light and that its motion carried it in a circle, just as sunlight moves in a circle.”

One more example, from Luther’s comments on Genesis 1:6, shows Luther’s reverence for God’s self-revelation in his word. Regarding the separation of the “waters above” from the “waters below,” Luther explains:

“But Moses says in plain words that the waters were above and below the firmament. Here I, therefore, take my reason captive and subscribe to the Word even though I do not understand it.”

In a subsequent post or two I’d like to get into some other important points that Luther makes about the creation week that remain very applicable in our context. But even before getting into details, it’s Luther’s approach to the Word that is very instructive, and vitally important. Interpretation of individual passages flows from this starting point: a posture of humble acceptance of God’s Word, even where we are unable to entirely explain it, even where our understanding of it isn’t where we would like it to be.

As the saying of Anselm of Canterbury puts it, “Credo ut intelligam” – “I believe so that I may understand.”

In subsequent posts, we’ll look at Luther’s lectures on the first chapters of Genesis in some more detail, using the same starting point that Luther himself used.